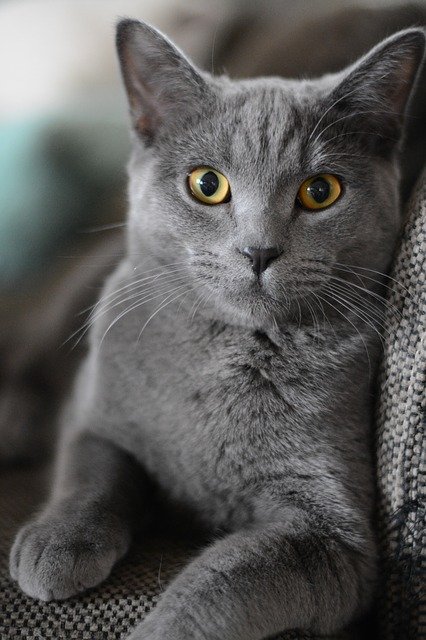 You may have heard of clickers. What are they, and how are they used when training your cat?

Continue reading to learn more on how to clicker train a cat.

If you have researched cat training, you may have heard of clickers. I have never used one personally for my cats because I have an alternative that works just as well. Jackson Galaxy is a fan of clickers. Many of his videos mention them. In one episode of My Cat From Hell, he shows a cat owner how to use a clicker to train their cat and dog to sit. Now that’s effective!

Another tool in your training arsenal

You can use clickers to train more than just cats. If you have a multi-pet household, you can use it for all your furry and feathery friends. However, we’re only focusing on your feline family members on this site. Keep in mind training isn’t much different between animals

According to The American Kennel Club,

“A clicker (or marker) is a tool that can make positive reinforcement training more efficient. After being repeatedly associated with a treat or reward, a clicker becomes a conditioned reinforcer..”

Why do clickers work?

Clickers are a form of communication with your kitty that is easier to understand than verbal commands alone.

When training, use the clicker first. Once your cat has performed the desired action, tap the clicker once more and immediately give them a treat. Eventually, you won’t even need the noms, just the clicker.

At the beginning of this post, I mentioned I don’t personally use a clicker to train my cats.

Here are a few alternatives:

An app is great because you don’t need more than your phone. You usually have your phone nearby. However, it may not be the fastest way to communicate with your cat. Worse yet, the app glitches, or your battery is low just as you’re about to begin training. You may lose your cat’s attention well before you have even started.

Another alternative to clickers is something you probably have lying around your house.

The good ol’ retractable pen. Just make sure it’s a pen that makes a sound that is loud and clear.

That’s write (pun intended) a clicky pen. I have tried using retractable pens when training my cats, and they respond to the sound well.

My main problem with using a pen is cats like Mio, who see everything as a toy. When trying to train her using a retractable pen, she bats at it.

Saying a single syllable word such as “yes.”

Don’t want a clicker or a pen? You can stick with a standard one-syllable yes.

The only problem with this is that it’s a common word used in conversation. If your cat hears you using it outside of the preferred actions, it may confuse them. Yes, cats are easily confused if you haven’t noticed already.

Noises you make yourself

My favorite method that I stumbled upon naturally is self-made sounds.

Growing up, I first learned how to train dogs. I found that they responded to certain sounds better than words. One particular dog, Lucifer, liked when I rolled the “R” in his name. He would not come when called by name alone. By changing how I said his name, he was by my side immediately.

Cats are the same way.

Early on, I realized my cats would look directly at me if I made a clicking noise with my tongue. It works with my cats and with unknown cats. You may think this would only work on domestic cats. However, I have found it works on ferals as well. I’ve never had a chance to use it on big cats, but I wouldn’t be surprised if it has a similar effect.

I don’t know precisely why it works. I have a couple of guesses:

1. It reminds them of sounds prey makes when it’s digging or scratching;

2. Or, maybe it’s because it’s a noise different from the ambient sounds in their environment.

Now that you have your cats attention

It would be best if you experimented with different noise tools when training your cat. Which sound do they respond to best?

Whether you use a clicker, retractable pen, or create a noise, everything depends on you and your cat.

Try eliminating distractions and confusion when it comes to clicker training. As always, be patient. Training takes time, no matter what tools you use.

Any thoughts, questions, or experience with clicker training? Comment below!

As an Amazon Associate I earn from qualifying purchases. CBD for Dogs Cats and Pets From Procana Shop Now